Poll: Dangerous Slopes Ahead for the GOP in Arizona

One year into Trump’s Presidency, it’s viewed as Unsuccessful

PHOENIX (November 15, 2017) – We have just passed the one-year mark since President Donald Trump was elected, and a lot has happened… One major event for Arizona was incumbent Arizona Republican Senator Jeff Flake dropping the bombshell that he will not be seeking re-election.

While we are still one year out from the 2018 General Election we wanted to see where Trump stands with likely voters and evaluate the state of the U.S. Senate race.

As we saw in Virginia, how voters feel about the President can have a huge effect on turnout, and results. In Arizona, the GOP faces some dangerous slopes.

We begin by looking at the top-line results of one particular question:

One of the most important factors in any mid-term election is the voters’ perceived performance of the president affecting down-ballot races.

We conducted a survey of six hundred likely 2018 General Election Democratic, Republican, Independent and Non-Declared voters across Arizona, based on likely 2018 turnout participated in this survey with a +/-4% MOE.

It is important to bear in mind that our likely General Election survey sample has a Republican +12-point advantage over Democrats. Despite the 12-point GOP advantage in the poll, the President’s first year is still viewed as unsuccessful.

Republicans and Democrats are polarized on this question (which is no surprise given the current political climate) however the all-important Independents view his first year as unsuccessful by a staggering 22-point margin.

Also, when it comes to gender, females were in the red by 10 points compared to males who were 3 points in the black.

When that data is graphed, it shows some dangerous slopes for the GOP. As soon as the question reaches self-described moderates, the President’s numbers go negative and stay that way. That one chart spells a lot of trouble for the GOP – with a 22-point negative among Independents, and a majority of moderate voters viewing the President’s first year negatively, GOP candidates face hard choices: If they distance themselves from the president, they risk losing conservatives; but without moderates and without Independents, it’s hard to see a pathway to victory. Especially, when 40% of the overall sample self-identified as “moderates.”

Now, looking at the personal impact to Arizona voters that Trump’s first year in office and its effects we find a possibly better picture with a +3-point margin for respondents who thought they were better off compared to those who are worse off. But the question becomes, how long will the 28% that say things stayed the same be okay with that? We think it is inarguably true that what propelled Donald Trump into the White House was a desire for change… Yet in our polling, 61% of Arizona likely voters say things are the same or have gotten worse. Bad news if the GOP doesn’t change that perception.

We see similarities between this question and the previous performance question with gender. Males were +11 and females were -7 if they felt they were better off. On a positive note, respondents in rural Arizona are +12 when it comes to being better off although the Arizona rural counties demographically are almost always the most conservative-leaning compared to Pima and Maricopa County.

Moving on, before we get into the head-to-head matchups for the Arizona U.S. Senate Primary and General election, let’s see where the main contenders sit regarding name ID and favorability.

The key findings were among the two Republican challengers regarding party affiliation and geographic location.

Based on geographic location Martha McSally has 97% name ID in Pima County where much of her current congressional district covers although she is far less known in Maricopa county (57%) and rural Arizona (44%).

Arizona’s Maricopa county has almost 2/3rd’s of the 2018 General Election vote but that is also where Kelli Ward is underwater with a 34% favorable / 47% unfavorable rating. Although she performs much stronger in rural Arizona with 45% favorable / 31% unfavorable.

Continuing with the subject of Kelli Ward and Martha McSally, if the election were held today, who would likely Republican primary voters vote for? Don’t worry, we have the answer.

Currently, Ward has an advantage of +7-points over McSally where Ward’s most notable strength derives from males, high school or less education level, rural Arizona, and self-identified “very conservative” voters – basically, Trump’s base.  McSally’s strength lies in self-identified “somewhat conservative” and “moderate” voters and a +30-point advantage in Pima County.

And last, but not least – the U.S. Senate General Election matchups.

Republicans hold a +12 Republican likely voter advantage in the 2018 General Election, and that’s how we conducted this poll, with a +12 Republican advantage.  But in both matchups, the Democrat is winning by a very slim margin. McSally has the best chance being 1-point behind Sinema with Ward close by trailing by 3-points, but they’re both in the margin of error.

So, why is a Democrat leading when Republicans hold a +12 point advantage? The answer is slopes. 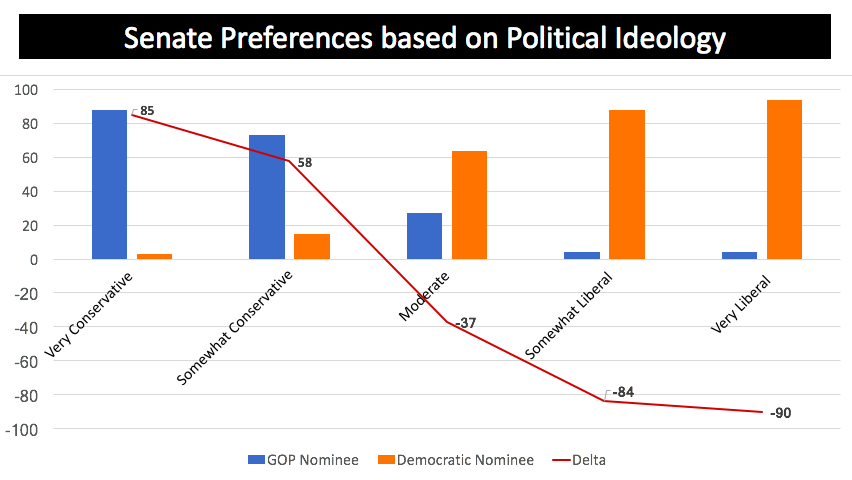 Whether it was Ward or McSally against Sinema, support based on political ideology was almost identical for either potential GOP nominee. This chart probably looks familiar because it basically mirrors Trump’s numbers in this lens.

Summary: As we start to move into the mid-term elections Trump’s support/approval among Independents is severely lacking; plus, some of his Republican base is still not fully onboard compared to the Democrats who are unified in their disapproval. The Republican primary fight between Congresswoman McSally and former State Senator Kelli Ward is currently in Ward’s favor, however, having campaigned state-wide for the past 3 years it appears she is well defined and may well have hit a ceiling among Arizona voters.

McSally has the advantage of being able to define herself and starts with far less of the negatives Ward currently brings to the table. We will be seeing a very competitive GOP primary and the exact opposite of the Democratic primary where Kyrsten Sinema faces little resistance. With Arizona having a late primary election date the Democrats hold the high ground.

“Republicans on the ticket in traditional ‘toss-up’ or ‘right-leaning’ races should prepare for the fight of their lives come 2018,” said Mike Noble, managing partner and chief pollster at OH Predictive Insights, a Phoenix-based leading behavioral research polling company. “The factors to look at ahead will be whether the U.S. economy is positive or negative and if Trump/Republicans can score major legislative wins on taxes, border security, healthcare or education.”

“Grab your popcorn because the Arizona U.S. Senate will be the race to watch in 2018,” said Noble.

Among the other results:

There are many issues important to Arizona voters however the top 3 issues are education (28%), illegal immigration (27%) and healthcare (24%). These issues will be the driving forces in the 2018 elections due to Arizona’s proximity to the border, uncertainty in health care law and the consistent coverage on our education woes. The biggest takeaway when looking at the demographics of these results was education being the top issue for Independents (38%) and Democrats (41%). The top issue among Republican voters was illegal immigration at 44% while only 14% of Republicans said education was the most pressing issue facing Arizona.

Methodology: This automated survey was completed by OH Predictive Insights on November 9th, 2017, from a likely 2018 General Election voter sample. The sample demographics accurately reflected party affiliation, geographic location and gender, however, age leaned heavily towards 55+ respondents due to it being automated. The sample size was 600 completed surveys, with a MoE of ± 4%.