Phoenix is on the brink of a public safety crisis

Phoenix is on the brink of a public safety crisis. As one of the fastest-growing cities in America, Phoenix faces the unique challenge of expanding its core infrastructure to match the rapidly expanding population. One of the key areas our city has struggled to keep pace in is the staffing of law enforcement officers. While the city’s population has exploded over the last decade, the growth of the police force has remained stagnant, placing the city well behind law enforcement staffing recommendations. 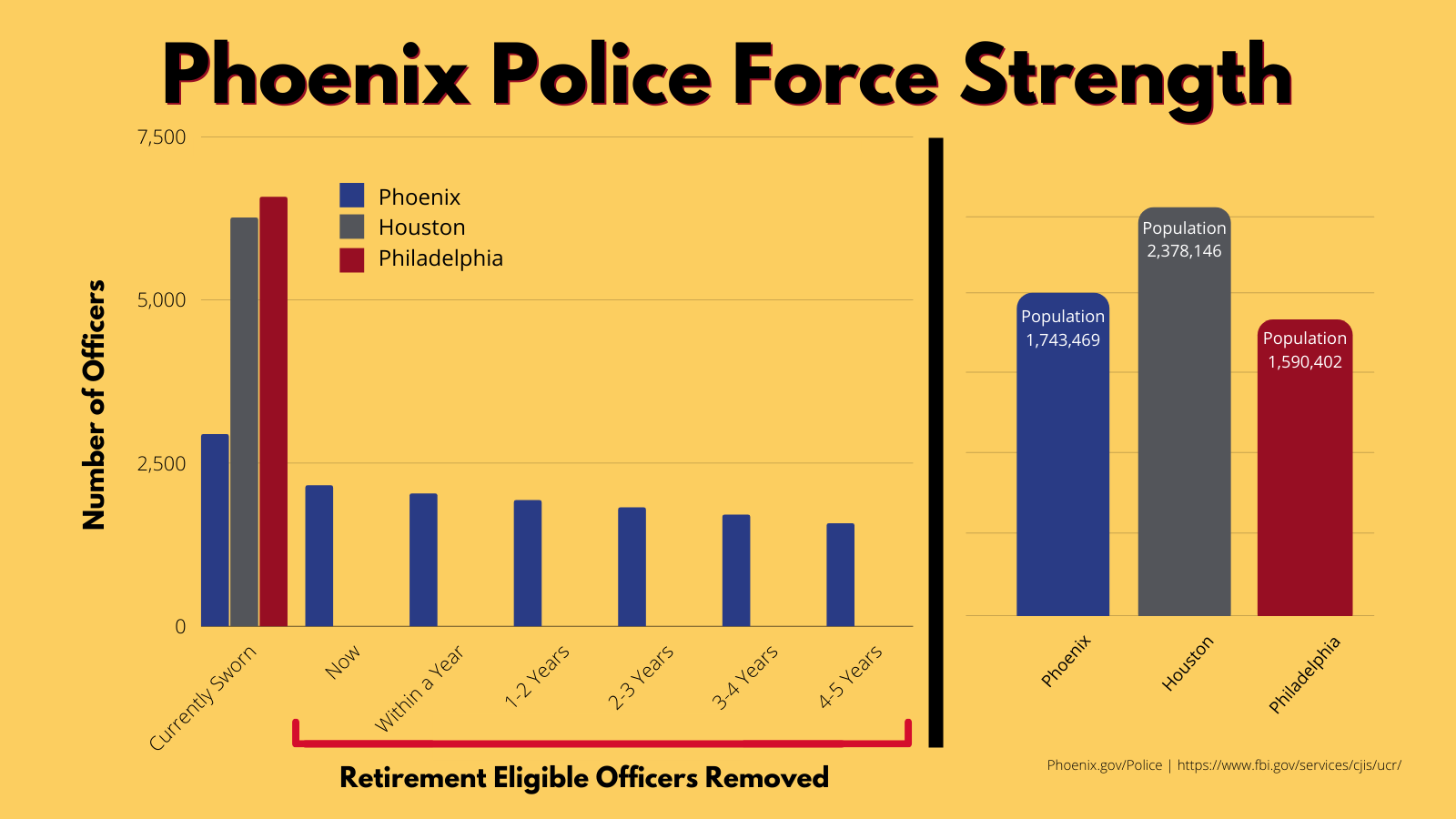 Staffing guidelines suggest there should be a ratio of three police officers for every 1,000 citizens. The city of Phoenix currently has an active force of roughly 3,000 sworn police officers. With a population of 1,733,630, our city has an officer to citizen ratio of 1.7 officers per 1,000 citizens, down from 2.4 in 2010. As the ratio between officers and citizens continues to decline, crime is on the rise in Phoenix. Between 2019 and 2020, Phoenix saw a 175% increase in domestic violence murder which trended with the rest of the violent crime increases throughout the city. These staggering numbers raise alarms when you consider the reality that our police are tasked with protecting us from these hastily increasing threats while operating at just half of their staffing capacity. Now more than ever, it is critical that we ensure Phoenix’s police force is adequately staffed and provided with the necessary resources to protect our community from the increasing occurrences of crime.

These numbers become even more concerning when comparing Phoenix’s police force to its total population and the population of other comparably sized cities. One startling example is the city of Philadelphia. Philadelphia’s population is just 9% smaller than that of Phoenix, but their police force is more than 225% larger.

Adding to the cause for concern is the fact that our police force is facing a further staffing crisis in the years to come. 31% of the officers we currently have in Phoenix will be eligible for retirement from the force within the next year1. This number will balloon to 46% over the next five years, leaving our city more vulnerable than ever while the population continues to increase. As the population continues to grow and the size of the police force continues to shrink, our overworked police officers will be forced to take on even more duties to account for the staffing shortages.

Phoenicians are taking note of these issues and their effect on the community. Our citizens have a largely positive relationship with their law enforcement officers. Over 60% of Phoenix residents that have interacted with the police have had a positive experience and 73% believe that Phoenix police do a better job protecting us than other major cities. Factoring in the stressful circumstances our officers find themselves in due to staffing shortages, Phoenix PD has developed a strong reputation among the community.

While their overall sentiment is positive, many citizens are concerned about the continued strength of the police force. 63% of people in Phoenix believe that there should be more police officers to reflect the rapidly expanding population of the city. On top of this, five out of every six citizens believe that our city would be better protected with more police officers.

As Phoenix continues to expand, the issue of crime will only become more apparent and the consequences more dire. Without a plan to increase the strength of our police force and replace officers who will be retiring over the coming years, we could find ourselves in the midst of a public safety crisis. It’s time for us to bring together our elected officials, law enforcement representatives, stakeholder groups, and the community to develop long-term solutions to protect our city and support our police officers.

About the Author: Chris Rutherford is a Phoenician and son of fallen Phoenix Police Officer Paul Rutherford.